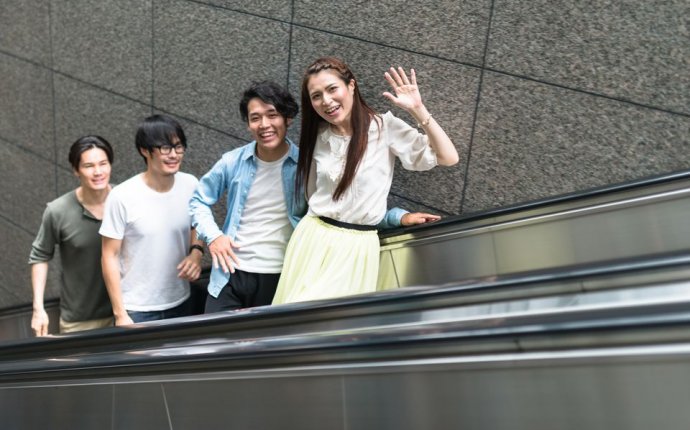 In the Japanese bow, the bower expresses appreciation and respect to the person being bowed to by bending at the waist. This is a gesture widely used in tandem with greetings like "ohayo gozaimasu" (good morning) and "konnichi wa" (hello, good afternoon) as well as words of gratitude or apology. Bows can generally be classified into three types depending on the deepness of the waist bend. The most casual bow is the "eshaku" bow. In this bow, the waist is generally bent at about a 15 degree angle. It is common to lightly dip the head and give an "eshaku" bow when exchanging a casual greeting or passing by someone of a higher social status. Of course using words by themselves is sufficient, but if you add an eshaku bow while saying "arigato" (thank you) to someone who has shown you kindness, your feeling of gratitude will come across as incredibly more heartfelt. The bow generally used in business interactions is the "keirei" bow. In this bow, the torso is lowered to about 30 degrees. It is used when entering and leaving reception rooms and meeting rooms and when greeting customers. The "saikeirei" bow, the most polite bow, consists of lowering the torso about 45 degrees. It is used to express feelings of deep gratitude or apology.

The gesture of bringing the palms of both hands together in front of your chest area is called "gassho." This custom originally comes from Buddhism, but in modern Japan it is used frequently in etiquette before and after eating. Before eating, it is custom to start the meal by doing gassho while saying "itadakimasu." "Itadakimasu" is a polite word that means "receive" or "accept (a gift or item), " and expresses a feeling of gratitude towards the food and the person who prepared it.

Japanese does have the word "sayonara" for "good-bye, " but the word "bye-bye" is also used frequently. It has a more casual nuance, and is used between friends and children. In the West, it is customary to lift up your hand with the palm facing outwards and open and shut the hand repeatedly, but the custom of Japan is slightly different. In Japan, people generally wave the open palm to the left and right. When waving to someone far away, the arm is generally lifted high to be more visible and waved to the right and left in a wide movement. However, the eshaku bow is more common when saying good-bye.

The penetration rate for cell phones has reached about 90% in Japan, and owning one is generally considered necessary. This means that etiquette in public places is considered very important. It is good to be particularly careful of the following things when in Japan.

・You should switch your phone to "manner mode" in quiet places like hotel lobbies and restaurants to avoid bothering people around you.

・You should switch your phone to "manner mode" when inside a Shinkansen (bullet train) and trains and avoid talking on the phone. If you absolutely need to talk on the phone, it is best to get off at a station and talk on the station platform. Also, you are expected to turn the phone completely off when near the priority seats to avoid problems with pace makers, etc.

@碲女わさらー団の相互: There exist Japanese traditional culture in which they really care about interval 間 of everything.

RT @King_Troll421: @ThaRealLadyLon Lol Otaku pretty much love everything about Japanese culture. 🤔🤔 Unless that's a weeb I can't tell

@Green Gremlin: I love it when white people think they know everything about Japanese culture. You know, stuff about fandom equivalences even though they -